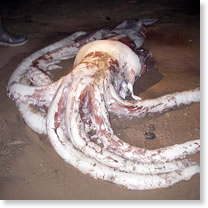 July 10, 2007 a giant squid measuring eight meters (26 feet) long with a body length of 2 meters (6 1/2 feet) and weighing 250 kilograms (550 pounds) has washed up on a beach on the western coast of the Australian island Tasmania.

Almost 5 years to the day, another giant squid was also washed up on a Tasmanian beach except this was a massive 15 metres (50 feet) long and weighing 250 kilogram (550 pound).

Scientists believe they could be a member of a new species and transported the animal in a trailer to the Tasmanian Museum and Art Gallery, where they examined it further.

Experts found several characteristics which they say they have never encountered before - including long, thin flaps of muscle attached to each of the squid's eight arms. What we've seen on this animal we haven't seen on other squid, and it's a significant feature," said the museum's senior curator of zoology, David Pemberton.

People do not often see giant squid, which live in the deep ocean. In fact, less than 50 giant squid have ever been seen. So when a giant squid was found dead on a beach in Australia last week, it was a reason for excitement!

You can tell from the name that this type of squid is very large! The giant squid that was found in Australia is 50 feet long, and giant squid have been found that are up to 60 feet long. They have larger eyeballs than any other animal. Each eyeball is about 18 inches across which is larger than a person's head.

Giant squid live by themselves in the deep ocean, typically far away from land. They are related to Mollusks such as smaller squid and octopus. All squid, even the small ones, hunt to find food, but only giant squid can hunt animals as large as whales.

Like something straight out of a Jules Verne novel, an enormous tentacled creature looms out of the inky blackness of the deep Pacific waters. But this isn't science fiction. A set of extraordinary images captured by Japanese scientists marks the first-ever record of a live giant squid (Architeuthis) in the wild.

The animalwhich measures roughly 25 feet (8 meters) longwas photographed 2,950 feet (900 meters) beneath the North Pacific Ocean. Japanese scientists attracted the squid toward cameras attached to a baited fishing line. The scientists say they snapped more than 500 images of the massive cephalopod before it broke free after snagging itself on a hook. They also recovered one of the giant squid's two longest tentacles, which severed during its struggle.

The photo sequence, taken off Japan's Ogasawara Islands in September 2004, shows the squid homing in on the baited line and enveloping it in "a ball of tentacles."

December 22, 2006Like pulling a shadow from the darkness, researchers in Japan have captured and filmed a live giant squidlikely for the first timeshedding new light on the famously elusive creatures.

© www.fishpo.com.au the home of Australian Fishing